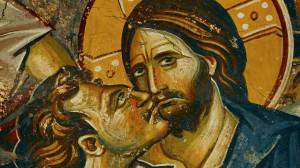 God is merciful. Behold the third delusion of sinners by which an immense number are lost! A learned author says, that the mercy of God sends more souls to hell than his justice; for sinners are induced, by a rash confidence in the divine mercy, to continue in sin and thus are lost. God is merciful. Who denies it? But great as is his mercy, how many does he send to hell every day ? God is merciful: but he is also just; and therefore he is obliged to punish those who offend him. He shows mercy; but to whom? To them who fear him. He hath strengthened His mercy toward them that fear Him. As a father hath compassion on his children, so hath the Lord compassion on them that fear Him (Ps. cii, 11, 13). But he executes justice on those who despise him, and abuse his mercy to insult him the more.

God pardons sin; but he cannot pardon the will or the determination to sin. St Augustine says, that he who sins with the intention of afterward repenting, is not a penitent, but a mocker of God’s majesty. But the Apostle tells as that God does not allow himself to be mocked. Be not deceived. God is not mocked (Gal. vi, 7). It would be a mockery of God to insult him as often and as much as you please, and afterward to expect heaven. But as God has shown me to many mercies hitherto, so I hope he will treat me with mercy hereafter. Behold the fourth delusion ! Then, must the Lord, because he has had compassion on you, show mercy forever, and never chastise you ? No: the greater have been his mercies to you, the more you have reason to fear that, if you offend him again, he will pardon you no more, but will take vengeance on your sins.

Say not: I have sinned, and what harm hath befallen me? For the Most High is a patient rewarder (Ecclus. v, 4). Say not: I have sinned, and have not been punished; for though God endures, he will not do so, forever. When, the number of mercies which he has resolved to show to the sinner is exhausted, he then punishes all his sins together. And the longer God has waited for his repentance, the more severe will be his punishment, says St. Gregory. (In Evang. Hom. 13). If then, O my brother, you see that you have, often offended God, and that he has not sent you to hell you should say; The mercies of the Lord that we are not consumed (Lam. iii, 22). Lord ! I thank Thee, for not having sent me to hell, as I deserved. Consider how many have been damned for fewer sins than you have committed, and labor to atone, by penance and other good works, for the offences you have offered to God. The patience which he has had with you, and the great mercies which he has shown to you, and not to others, ought to animate you not to offend him again, but to serve and love him.