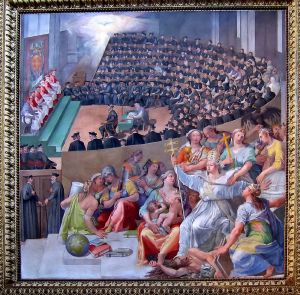 “[T]here is the legal problem of matrimonial nullity, this has to be reviewed, because ecclesiastical tribunals are not sufficient for this”. – Pope Francis, 28 July 2013

“Can we eliminate the necessity of having detailed personal interviews, hefty fees, testimony from witnesses, psychological exams, and automatic appeals to other tribunals? In lieu of this formal court-like process, which some participants have found intimidating, can we rely more on the conscientious personal judgment of spouses about the history of their marriage (after all, they are the ministers and recipients of the sacrament!) and their worthiness to receive Holy Communion?”  – Bishop Thomas Tobin, 21 September 2014

“CANON XII. If any one saith, that matrimonial causes do not belong to ecclesiastical judges; let him be anathema.” – Council of Trent, Session XXIV, 11 November 1543

12 thoughts on “Trent, the Pope, and Annulment “Reform””