For 11 months until August of last year, the last flatware manufacturing company in the United States ceased production. But today you can buy American-made flatware once more. Liberty Tabletop stainless steel flatware is “proudly manufactured by American craftsmen, right here in the USA!” by Sherrill Manufacturing of New York, a successor to the legendary Oneida flatware operation.

Perhaps you need a new set of tableware of your own? Perhaps during this season of weddings you can give these as a gift to some young newlyweds! If you believe in restoring American manufacturing, buy these quality products and get the word out! The flatware can be ordered online on the Sherrill Manufacturing website.

The event opened June 25 and ran through July 1. More than 200 attendees enjoyed six full days of activities, which culminated with a Mass at the cathedral, bringing together parishioners and colloquium participants to hear music from association members.

“They sing like angels,” said Mary Cohchran, a cathedral parishioner who was attending the Mass with her family. “We are all stunned by all this magic.”

“I didn’t know today we would hear this beautiful music, I am glad that we are here,” fellow parishioner Michael Leal told the Intermountain Catholic, newspaper of the Salt Lake City Diocese.

During the week, the colloquium participants gathered in rehearsals and classes to further their knowledge and enrich their parish music ministries.

“This colloquium has enriched me in all three senses: musically, spiritually and intellectually. Everything was perfect,” said Frank Merhart, who came from Virginia.

The colloquium’s primary focus was instruction in chant and the Catholic sacred music tradition. Activities included participation in chant choirs, daily and nightly lectures and performances, and daily celebrations of liturgies in both English and Latin.

Here’s a small taste of what the participants experienced:

An nice article from 2001 in the San Francisco Chronicle about the fair city of Chico is worth savoring:

“Let’s get this out of the way right now: One of Herb Caen’s most enduring punch lines – that Chico’s Safeway stocks Velveeta cheese on the ‘gourmet food’ aisle – is no longer true. I checked. Sorry, Herb.

But in many other happy ways, Chico is still stuck in the 1950s. From leafy Bidwell Park, with its bandstands and swimming holes, to a downtown straight out of Main Street USA, it manages to hold onto the homespun delights of a small college town while mixing in the comforts and necessities of today’s world. Think of it as Mayberry with a microbrewery.

Increasingly, I find myself pining not for luxury-collection hotels or jaw-dropping scenery or Michelin-starred restaurants, but for the sort of idealized small town where people wave to you as they drive by, where the wood-floor hardware store smells of nails and hemp rope, where old men read the newspaper in barbershop chairs, where pigeons roost atop statues and mothers gather with their baby strollers in green parks. I yearn to pick up and go live in such a town – if only for a weekend …”

I have to say, with the unfortunate wreckovation of downtown plaza, Chico’s downtown has morphed into something more like Berkeley than Mayberry. But there remain many fine shops and restaurants amidst the “grit”, and some of them do have the Mayberry touch. I’m thinking of “Mom’s” restaurant in particular.

Our children played in the storm
We gave them life
They gave us heaven
Laughter in the rain.
I gave you my heart
And you gave me yourself
“Ca c’est bon, ca c’est bon” –
Cried the hurricane.

That about sums it up.

How do our children give us heaven? Three ways: 1. By their joy and innocence, a foretaste of heaven; 2. By the many trials of parenthood, our sanctification; 3. By their prayers for us. 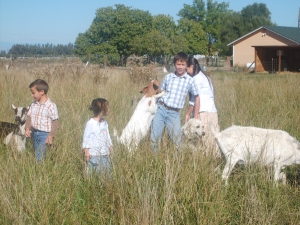 The Father of our country, George Washington, refused the suggestion of being America’s first monarch, and in any case he is believed to have been childless. However, his older brother Samuel has abundant progeny, and according to certain laws of monarchial legitimacy which I don’t quite understand, Samuel’s fifth generation descendant Paul Emery Washington of San Antonio, Texas, would be today’s rightful American king had George Washington accepted the venerable office.

“Of the 200 men that carry the Washington name, though, Paul Emery is the end result of two lines—a very rare possibility that makes him the likely heir.

That’s a concept that Paul would rather not think about. ‘I doubt if I’d be a very good king,’ he says. ‘We’ve done so well as a country without a king, so I think George made the best decision.’ His family, which includes three sons and one daughter, are fifth-generation descendants of George’s oldest brother, Samuel. But Paul would’ve been the ninth or tenth king of America depending on which of the lines you follow.”

A city stands or falls by the quality of its “leading families” – families whose social, cultural, political, and economic influence is highly disproportionate to their numbers. The idea of leading families can be uncomfortable for Americans.  The very notion smacks of aristocracy, which many believe we’re not supposed to have in this country. But even Thomas Jefferson with his Jacobin sympathies acknowledged the existence of a “natural aristocracy” among men. Therefore every city has its leading families, whether they be strong or weak, virtuous or corrupt, respected or despised.

What are the characteristics of a good leading family? Here are a few qualifications:

1. History. A leading family has a multi-generational history in the city, generally three adult generations at minimum. Cultural influence can be slow and needs time to percolate.

2. Religion. A leading family is motivated by faith, supportive of a local religious institution, and operates within a well-defined religious tradition.

3. Education. A leading family is not only an educated family, but in many cases a family of educators.

4. Fecundity. Members of leading families have more than the average number of children.

6. Patronage of the arts. A leading family is committed to the flourishing of music, literature, and the visual and performing arts. If they are not artists, writers, or musicians themselves, they do what they can to support and promote the arts in their city.

7. Politics. A leading family is knowledgeable about local political issues, serves on local governing bodies, and exercises political influence for the good.

8.  Wealth. In most cases, a leading family has acquired enough wealth to financially support worthy causes in the community. 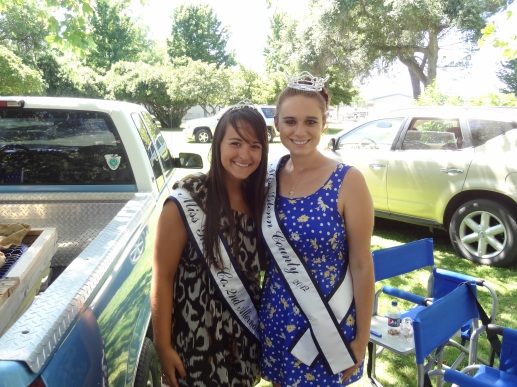 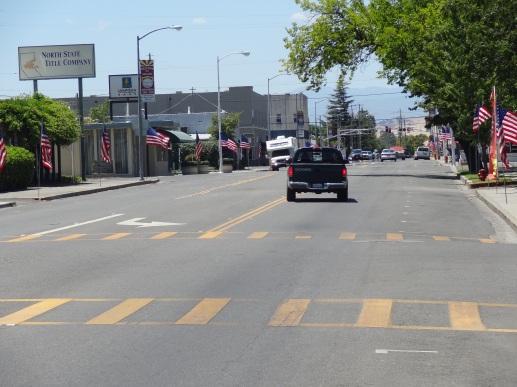 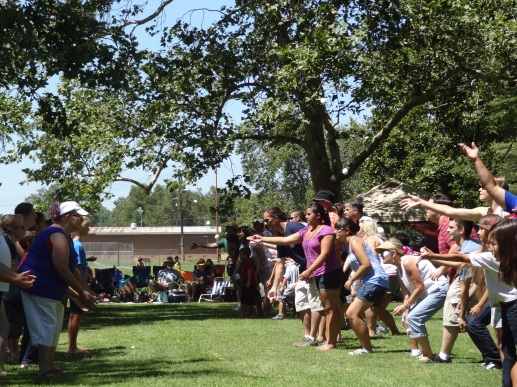 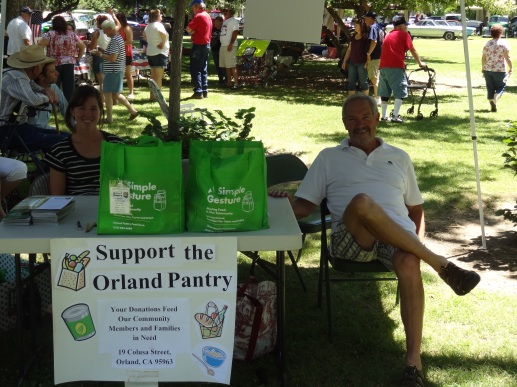 L’Angelus is a talented family band from the great Catholic city of Lafayette, Louisiana. They’re a bit on the edgy side, so much that my children are scandalized that I enjoy their performances. I’m a bit scandalized myself. Anyway, I find in their music a youthful joy and innocence that makes me smile every time. And if they are a bit edgy, they know where the edge belongs and have respect for it.

Tomorrow, for the third consecutive year, I will be officiating at the frog jumping contest for Orland’s Old Fashioned 4th of July celebration. If I still lived there, I believe that would put me next in line for mayor. With its potato sack races, egg tossing contest, and ladies’ hat competition, Orland’s celebration is a festival of classic small town Americana. In many other ways, too, little Orland remains a bastion of American tradition and culture.

Now then, I realize that the American Revolution was not a slam dunk as a moral proposition. It’s hard for me, a traditionalist, to celebrate armed rebellion against a lawful monarch whose “abuses” pale in comparison to those of our own federal and state governments. Nevertheless, good things did result from American independence, and those good things are worth celebrating.

Today our nation is undeniably at a crossroads. The American people have changed fundamentally in just three generations. They believe things that would shock their ancestors – not things of peripheral importance, but things that mark the essence of a culture. They have, by and large, rejected even the “laws of nature and nature’s God”, instead making war on nature, on biology, on legitimate authority, and on reality. They have embraced a philosophy of greed and hedonism and therefore of exploitation and abuse, though few will admit the truth of it. Liberty, in the minds of most Americans, is primarily validated by extreme or licentious behavior that must be protected at all costs. When you think of freedom, do you really think of Abraham Lincoln or Mother Teresa? Or do you first think of a person of ambiguous gender covered with tattoos and body piercings? Maybe you think of Bill Gates or Warren Buffet. Either way, I rest my case.

Meanwhile, our duly elected president and his radical leftist thugocracy in Washington (spit!) has done more to undermine authentic freedom in this country than anyone dreamed possible. Unfortunately, his opponents are factionalized and sadly lacking a convincing narrative. Libertarians and constitutionalists, though prominent and well-funded, are faced with the structural impossibility of their dreams ever materializing. Catholics, evangelicals, and other cultural conservatives, while perhaps more institutionally realistic, are socially and politically marginalized.

Furthermore, Americans are tired of politics and political activism. The best of them are just too busy with raising families, work, religion, and real life; the rest of them (and by far most of them) are lost in boredom, in pursuit of “self-actualization”, or in the bread-and-circus culture of non-stop entertainment. It seems likely that the next election belongs to the candidate with the simplest, shortest, and sweetest possible message. What can “independence” mean in this dismal context?

It has been observed that perhaps the most revolutionary words an American can utter today are those which open the Creed:  “I believe in one God, the Father almighty…”  God, not I, is sovereign; the Lord, not the state, is almighty; God’s way, not mine, is normative; the Lord’s designs, not my puny plans, are definitive.  To rebel against God, then, brings, not liberty, but slavery; to obey the Lord leads, hardly to shackles, but to genuine freedom.

So, maybe I should be wishing you all a “Happy Dependence Day.”

Fisher More College is a promising new Catholic liberal arts college in Fort Worth, Texas. The Dean of the college is Dr. Taylor Marshall, whose esteemed blog Canterbury Tales is always a fascinating read. The college is unique in that, liturgically, it is committed to the Extraordinary Form of the Roman Rite, and by extension to the timeless theology and rich spirituality of the Catholic tradition.  Last month the college announced that it has found a suitable campus in a five-story, 76,000 sf, majestic former convent built in 1906. The Our Lady of Victory Building will house the college’s administrative offices, classrooms, library and chapel.